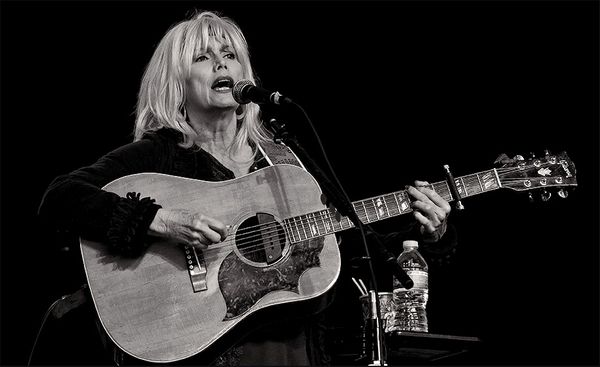 In 1964, one of by best friend's mom drove us to see Peter, Paul & Mary in Pasadena, a wonderfully entertaining performance. We waited patiently for autographs after the show and PP&M accommodated us very graciously. Later that year she drove us to see Bob Dylan at the Santa Monica Civic. I was 14 then and dressed appropriately (we thought) in our best 'sock hop' garb, white dress shirts, inch wide skinny ties and cardigan sweaters! Our presence in those 'Mr Rogers' outfits must have struck fear in the hearts of that long-haired, scruffy boots and leathers crowd that was Dylan's fan base at the time. We were equally amazed by that crowd, they seemed to have emerged directly from 'Sherwood Forest'.

Thus, began my addiction to live music which has never waned since...and 50 years later I can hardly wait to see Steve Earle tomorrow night...of course that's not Steve Earle over there, but the first time I saw Emmylou was when she opened the show at 'Hags' Place' right around the corner from the Palomino in North Hollywood. It was love at first sound (and sight)!