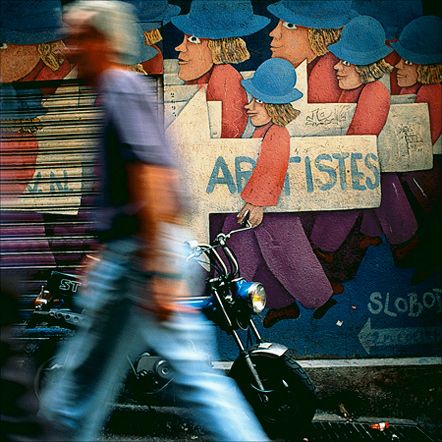 Many years ago, I saw my first museum exhibit by a solo photographer, W. Eugene Smith. Wow! who coulld not be struck by the power of those exquisite B&W images and the stories they told? (often featured in Life Magazine). A quote from Smith states, "Photo is a small voice, at best, but sometimes - just sometimes - one photograph or a group of them can lure our senses into awareness." No American photographer of the time did that better than Smith. He was a master of the photo essay. Between 1957 and 1965 he photographed and recorded conversations and musical performances of many jazz musicians in the Manhattan loft in which he lived.

The premiere jazz photographer of the post-war era is the late great Herman Leonard. When I first saw Herman's 'jazz portraits' at the G.Ray Hawkins Gallery in Los Angeles many years ago, I was stunned by their detail and beauty. Early in his career, he apprenticed with the great portrait photographer Karsh in Canada and that early training really shows in his own work. But these were no studio portraits, these were mostly shot live in small jazz clubs like the Royal Roost in New York City, wtih lights that Herman meticulously set up himself. He captured the essence of llive jazz music as no one had, either before or since!

I love the 'street photographers'. Early pioneers like Atget and Brassai in Paris and later Henri Cartier-Bresson and his 'decisive moments', the romnanticism of Robert Doisneau, the wit and whimsey of Elliot Erwitt, Bruce Davidson's 'Central Park', the relentless Gary Winograd and more recently Alex Webb who manages to cram more significant slices of the world into a single frame than anyone.

These are just a few of the photograhers that have impressed and inspired me try my hand at photography. I am basically self-taught having taken basic photo classes at Glendale JC, the Sierra Club Camera Committee, stalking the elusive 'chocolate lilly' with Steve Cohen, Adventure Photo Workshops exploring the 'backroads of California' with Dave Wyman and many others.

For nearly 7 years, I helped to maintain the photo lab and assist students and teachers at the Tri-Community Photo Center in Covina. Thanks to my partners Luann, Dave , Paul & Nancy. Joe, Shayne & Danny , ALL the 'Carols' (you know who you are), and of course the students, I managed that experience with lots of hard work, humor and hopefully, a bit of finesse.

The high point of my photo education though, was the three wonderful years I spent assisting events and workshops at the Julia Dean Photo Workshops (JDPW) in Venice, Ca. (she has since re-located to Hollywood) Working for and with Julia and her crew (Brandon & Skeely) and my favorite partner Lauren, was just a joy and an inspiration. I had the great good fortune to assisst workshops with Sam Abell, Joel Sartori, & Nevada Weir (National Geographic), Watching Carolyn Cole (L.A Times, Pulitzer Prize 2004) in action was a 'revelation'. Want to learn about 'street shooting' and 'composition'?...just look at any of Alex Webb's (Magnum) photos. I never would have guessed that 'Celebrity' photoghrapher Greg Gorman would be so affable. He even brought bottles of wine from his first vintage of GKG Cellars 2006 for all to share on the last day of his workshop!

Thanks, Julia, for all of those wonderful opportunities.

As Robert Doisneau so elegantly stated after a lifetime in photography; all he managed to snatch was 'Three Seconds of Eternity' If you enjoy some of 'my few seconds' here...what more could I ask?